That typical woolen cloth with a curly surface, moreover widespread in the green flag colors and orange goose beak, known by the name of Casentino, particularly appreciated by the gentlemen of the Tuscan countryside, especially if the neck is "garnished" with a red fox fur, it is nothing more than the refined descendent of that ancient rustic cloth distinguished by the Florentine merchants of the '300 with the term of thick cloth of Casentino.

For over a century this characteristic fabric has met the favor of the public, so much so that many characters of politics, culture and entertainment (even Audrey Hepburn in the film "Breakfast at Tiffany" wears a coat made with this cloth), do not disdain dressing with clothing made in this unique woolen cloth. Unfortunately, our research has not been able to determine with mathematical certainty the date of birth of this eccentric fabric and even we have been able to establish through certain documentation which wool factory, first in the valley, has made it. It must be said straight away that the complexity of the case lies exclusively in determining who imported first and in what year, a machine called ratinatrice, (from ratiner: accotonare, make cotton balls) essential to perform the curling finishing that characterizes this cloth. Of course we know that at the end of the nineteenth century or at the beginning of the twentieth century, when the mentioned fabric appeared, only two companies in the Casentino valley were able to import machines like the rating machine from abroad. These were the textile factories of Stia and Soci. 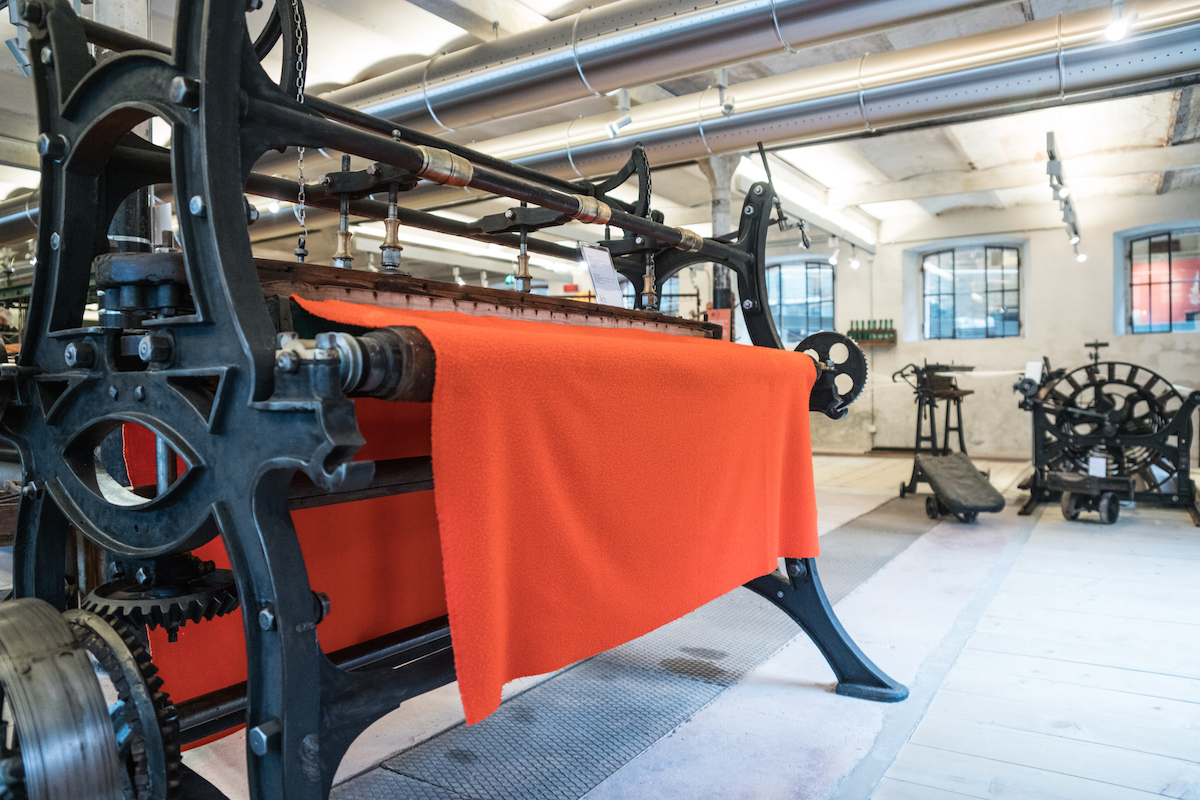 The time limit to which we refer is determined by some documents that show us how in 1890 the Casentino cloth with the part of the ratinata right (the one with the curl) had not yet appeared on the markets, while, in 1915/16, it was proven the presence in the Lanificio di Stia of a German-made machine (coming from Aachen, on the border between Germany-Holland-Belgium). We have fortunately identified it by carefully scrutinizing a collection of images of this Lanificio made in the spring of 1916.

For many in Casentino this machine is improperly called "rattina". It is made up of two sides, from the body of the machine and two large long and narrow horizontal boards through which the fabric to be ratrained advances well; the lower fixed axis is tightly wrapped with a good cloth, the upper one, normally lined by a rubber horn, exerts an adjustable pressure on the fabric; this is called ratinator table because, due to the effect of electric controls, which give it a circular movement, it causes the curly rat effect on the hairy surface of the fabric.

The movements of the upper table can also be exclusively straight and then longitudinal, transverse and diagonal right or left wavy effects are obtained. This is the description of the ratinator as it normally leaves the factory of production; but in Casentino, small but substantial changes were made to the gaskets, especially to those of the ratinator table, which in this area had to work on ordinary wool, needed a greater rating effect to force the pelami to assume and stabilize in the desired effect. If in 1916 it was already supplied to the Stia plant, it is not said that it had been purchased in that year, being that the critical period of the First World War in which all the productive efforts of the Lanificio were concentrated on military supplies. Surely the ratinatrice was already several years old when she was portrayed in the image that came to us. On the other hand the line of the machine, the design of the sides, some wooden gears existing in its mechanisms (from the oral testimony collected at the time we know that these were later replaced by Stia with others in cast iron), qualify it as a very old object.

Thus the probable period of the arrival of the machine, and the consequent birth of the casentino with the curls, would be circumscribed to a space of time no greater than two or three years. The deepening of a more exact date at a certain point was interrupted due to force majeure: the attempts made in the hope of finding and contacting the company that built the ratmaker of Stia have been in vain since the company Tilman Essen-Inhabert: Mateheé & Scheiber by Burthexhid bei Aachen (data on the side of the car) unfortunately no longer exists. Around the seventies the ratinatrice disappeared, ignored in the many commercial vicissitudes of this Lanificio; the traces of it were lost also from Prato where we had rediscovered it.

Only a meticulous research, pilgrimage of merchant in merchant for the center-north of Italy, has given us the satisfaction of tracing this worthy specimen of the most precious Casentinese and Tuscan archaeological-industrial collecting in Lonate Ceppino in the province of Varese within the Ramtex company, probably ready to pass in the hands of some collectors. As well as an "act of justice", after a century of vicissitudes, thanks to the benevolence of the family of Italo Radini, owner of the Ramtex company, it finally returned to the Lanificio di Stia, to symbolize the remote constraint of an entire valley with art textile and to attest also the paternity of a fabric that, acquired international fame, has made the turn of the ateliers of all the world.